Thank you for your interest in publishing press release with pulp & paper. Our client success team member will get in touch with you shortly to take this ahead. While you're here, check out our informative and insightful press releases. Happy Surfing!

Bang Energy Slashes Plastic Use by 98.7%!

In an epic and unprecedented initiative to protect our planet, Bang Energy has transitioned its plastic use from roughly 97% to 1.3%!

“We have one planet and we must all do our best to protect it. I have fished the waters of South Florida for over 50 years and it has gone from pristine to polluted. We have pumped everything from plastic to poison to poop into our waterways. This is sickening, and it has to stop and be cleaned up now!”

WESTON, Fla., Nov. 06, 2020 (GLOBE NEWSWIRE) -- It’s no secret that plastic containers are a major environmental concern. According to The Guardian, a million plastic beverage bottles were purchased every minute around the world in 2017, and the vast majority of them (about 80%) wind up in landfills — typically after just a single use. The Coca-Cola Company is the biggest plastic polluter on the planet and, according to BBC News, pumps 200,000 plastic bottles per minute into our environment, with no end in sight and no plan to stop this insanity. Only YOU can stop this atrocity by not purchasing plastic bottles. It’s really that simple!

Each plastic bottle takes up to 1,000 years to decompose and, in the process, leaks harmful chemicals into the environment, including the world’s oceans. Researchers “conservatively estimate 14 million metric tons of microplastics reside on the ocean floor.” This is 25 times greater than what was previously believed and, obviously, has a profound impact on ocean life. In fact, it’s estimated that approximately 5 to 13 metric tons of plastic seeps into ocean waters every year, where it’s ingested by sea birds, fish and other organisms. Even humans are not immune. Researchers at Ghent University in Belgium recently determined that seafood eaters also consume up to 11,000 tiny pieces of plastic every year.

Sadly, those in the beverage industry have been among the worst environmental offenders. Just last year, Break Free From Plastic named Coca-Cola the top global polluter for the second year in a row. This global movement further reports that, during cleanup efforts in 37 countries across four continents, 11,732 Coca Cola-branded plastics were found — more than the next three top global polluters combined.

And even companies that falsely claim they and the products they produce are environmentally conscious may be some of the biggest polluters on the planet! For example, the multinational food packaging company Tetra Pak, which makes juice boxes — the kind with the tiny plastic straw attached — along with boxed water, coconut water, etc., claims that its aseptic containers are “100% recyclable.” But, are they really 100% recyclable; and, recyclable by whom?

Because these containers are a fusion of polyethylene, paper and aluminum, special equipment is needed to recycle them; hence, many aseptic Tetra Pak containers are not accepted by recycling plants. Little wonder Tetra Pak’s global recycling rate was a mere 26% in both 2018 and 2019, according to the company’s website.

“I would love to see and investigate the data that proves this 26% recycling claim by Tetra Pak. If recycling plants do not accept Tetra Pak products, who is handling Tetra Pak’s global recycling and where is it taking place?

This is why Bang Energy is committed to more easily recyclable container options, such as aluminum cans and containers, which are generally accepted by all recycling plants and are recycled over and over again in a true ‘full-loop’ recycling process!”

Green Biz reports that, “in the United States, a staggering 105,784 aluminum cans are recycled each minute — leading to an overall recycling rate of nearly 50 percent, the highest recycling rate for any beverage container.”

Even better, 75% of all aluminum produced is still in circulation, with the average aluminum can containing approximately 73% recycled material. Not only does this produce less waste, but creating new cans from old ones also uses 90% less energy and generates 90% less emissions than making cans from virgin materials, Green Biz notes.

To help stay as eco-friendly as possible, Bang Energy recently unveiled a new processing plant in Lithia Springs, Georgia. When fully operational, this 644,000-square-foot facility will be able to produce 4,200 aluminum cans per minute. Bang is also working with county officials in Pembroke Pines, Florida, to engage in a full-loop aluminum recycling program.

“We are BRINGING THE BANG by doing things differently. We don’t wait on others. We set trends and shift paradigms. When it comes to preserving our planet, Bang Energy is inventing the future today. We lead by decisive action. By the time we wait on Coke and other beverage giants to stop polluting our planet, we may all be dead!”

Jack Owoc is the CEO, CSO (chief scientific officer), and founder of Bang Energy and its extensive portfolio of allied brands. Bang Energy was founded in 1993 with one goal in mind: to produce the highest grade, university-proven sports supplements and performance beverages in the world. Bang Energy has funded roughly 30 landmark, human-subject studies on its products, including BANG® and Redline energy drinks, at UCLA, University of South Alabama, Florida State University, Baylor, University of Southern Maine, Memphis University, College of New Jersey, FIU, and other top universities in the country. For more information and daily trendsetting updates, workout tips, and supplement research, stay connected by following Jack Owoc on Instagram, @BangEnergy.CEO, visit Bang Energy’s website, www.bangenergy.com, and follow Bang Energy on Instagram, @BangEnergy.

A photo accompanying this announcement is available at https://www.globenewswire.com/NewsRoom/AttachmentNg/a4198900-85ee-4579-88ed-ad5e01c9d3ae

Bang Energy Slashes Plastic Use by 98.7%! 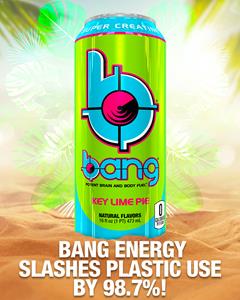 In an epic and unprecedented initiative to protect our planet, Bang Energy has transitioned its plastic use from roughly 97% to 1.3%!